Showing posts from 2012
Show all

NO BREAKFAST WITH BLOOMBERG 2012 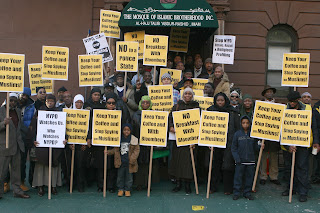 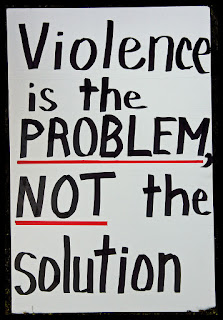 THE CURSE OF CAIN
My Friday, December 21, 2012 sermon on violence in modern day America:
http://www.youtube.com/watch?v=RL0A8w32CTg 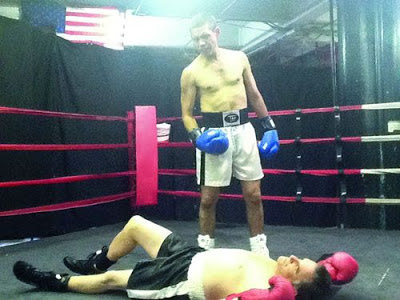 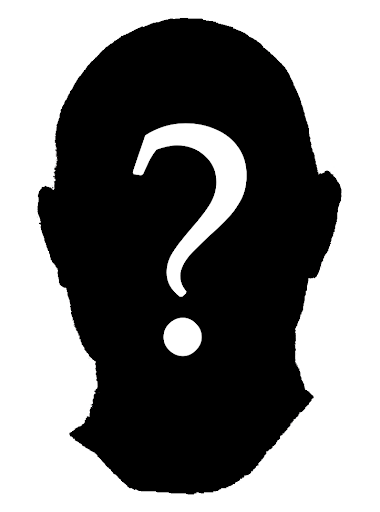 NYC MUSLIM LEADERS AND THE POLITICS OF COMPROMISE DURING THE LAST YEAR OF THE BLOOMBERG-KELLY ADMINISTRATION
Somber Reflections on the 16th Day of Ramadan
(Monday, August 6, 2012 C.E. )
By Imam Al-Hajj Talib ‘Abdur-Rashid
As-Salaamu ‘Alaikum wa Rahmatullahi wa Barakatuhu, wa Ramadan Karim ! Tonight as the sun sets over the skies of New York City, and Muslims break their fast ending yet another day and beginning another night of Ramadan worship, Mayor Michael Bloomberg will host yet another annual iftaar, just as his Police Commissioner, Ray Kelly, hosted another annual Pre-Ramadan briefing a few weeks ago. These events have occurred over the pastyears, but in 2012 they have taken on an ominous significance.
As the world now knows, over the past year the Associated Press revealed in a Pulitzer Prize winning set of articles, that the NYPD, under the leadership of Mayor Bloomberg and Commissioner Kelly, engaged in widespread, warrantless surveillance of the Muslim community and its leaders…
Post a Comment
Read more 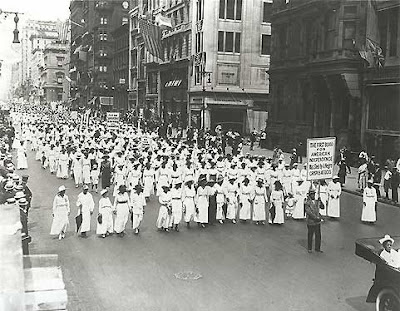 THEN: AFRICAN AMERICANS OF THE NAACP MARCHED FOR FREEDOM, JUSTICE, & EQUALITY, IN 1917

We all enjoy American freedoms because of their sacrifice and courage NOW:


ALL MUSLIMS ARE ENCOURAGED TO EITHER DRESS IN WHITE, OR WEAR A WHITE KUFI, KHIMAR, HEAD SCARF, HIJAB,OR DISTINCTIVE BASEBALL CAP, TO THE JUNE 17TH SILENT MARCH TO END RACIAL AND RELIGIOUS PROFILING. THE REASON FOR THIS IS TO INCREASE OUR VISIBILITY AS MUSLIMS IN THE SEA OF HUMANITY


AMERICAN MUSLIMS OF ALL ETHNICITIES PLAN TO COME OUT WITH FAMILY, FRIENDS, AND COMMUNITY ON THIS DAY, FOR A HISTORIC SILENT MARCH, WHEN ALL PEOPLE WILL STAND FOR JUSTICE. BY ALLAH'S WILL WE WILL NOT BE IGNORED, DISMISSED, OR COMPROMISED BY BLOOMBERG & KELLY !

WALK IN QUIET OR SILENT DHIKR, DU'A, RECITATION OF
QUR'AN

May 11, 2012
Muslims first arrived in this country while the United States was in its infancy. Thousands of Muslim slaves were brought here from Africa and worked on southern plantations. Today, there are as many as nine million Muslims in the United States, in all parts of the country. We are doctors, lawyers and police officers. We are active participants in cities, towns and villages, sitting on city councils and school boards, volunteering for civic groups and coaching Little League teams. We are of all races. Some of us were born here, others came in search of a better life for our children. We are Americans.
As Americans we have the same concerns as our neighbors. We worry about bringing home a paycheck, about raising children and about keeping our families safe. And so we worry about terrorism and have a stake in preventing it and any other kind of violence. We have been at the forefront of preventing terrorism, cooperating with law enforcement and raising a red flag whenever we see or hea…
Post a Comment
Read more

THE STORY ON MUSLIM AMERICAN TERRORISM YOU PROBABLY DIDN'T SEE

Here's an interesting story that came out 2 months ago that you probably didn't see and public officials like NYPD Police Commissioner Ray Kelly and his supporters don'ttalk about publicly:

Empirical Study Confirms That American Muslims Do Not Pose a Threat of "Homegrown Terror"
" Today, the N.Y. Times reported that Charles Kurzman, author of a study by the Triangle Center on Terrorism and Homeland Security, concludes American Muslims pose "a minuscule threat to public safety." The report found that 20 American Muslims were charged in violent plots or attacks in 2011, down from 26 in 2010 and 47 in 2009. It also found that not a single murder in 2011 resulted from extremist violence by Muslims in the United States.

THE LATEST NYPD EXPOSE: IT'S NOT JUST THE MUSLIMS 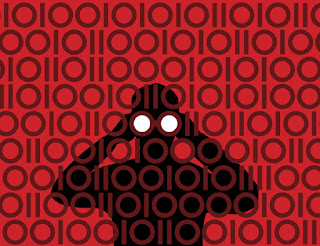 READ THIS ARTICLE CONTAINING THE LATEST DISCLOSURES BY THE ASSOCIATED PRESS:

MY COMMENTARY : For those who still don't understand the implications of the NYPD warrantless surveillance of the Muslim community, here is the latest evidence of what I have been saying for months. The NYPD has been illegally spying not just on Muslims but on non-Muslims as well, in defiance of the law (which prevents domestic spying upon US citizens) and previous legal agreements (like Handschu) http://thevillager.com/villger_293/asneakymoveon.html. This latest episode focused upon us Muslims is just part of a larger fight that has to do with the constitutionality of certain law enforcement tactics. The NYPD has an attempted media spin justification of its acttions, but mark my words . There will be HUGE court battles over this! The NYPD , with its lack of transparency and accoun…
Post a Comment
Read more

A DAY OF ACTION FOR IMAM JAMIL EL-AMIN

The following statement was written by me in my capacity as the Deputy Amir of The Muslim Alliance in Nortrh America (MANA) and the Amir (President) of the Majlis Ash-Shura of Metropolitan NY .It was written for an event that was held yesterday in Atlanta, organized by supporters of Imam Jamil, including the indefatigable Hajj Mauri Saalakhan:

"A Day Of Action” for Imam Jamil Abdullah Al-Amin Monday, March 19, 2012, at the Georgia State Capitol Statement by Imam Al-Hajj Talib 'Abdur-Rashid
As-Salaamu 'Alaikum wa Rahmatullah, dear Brothers and Sisters in attendance at today's important event. Although I am not able to be with you today, I wish to add a voice of support on behalf of both The Muslim Alliance in North America, and the Majlis Ash-Shura (Islamic Leadership Council) of Metropolitan New York, for our beloved and respected brother in Al-Islam, Imam Jamil Abdullah Al-Amin. 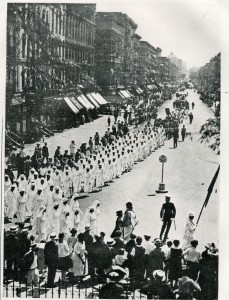 INTRODUCTION: As the struggle and call continues for greater accountability on the part of the Mayor and Police Commissioner with regards to the unjust , warrant-less surveillance of the Muslim community by the NYPD , lone acting imams and Muslim heads of not-for-profit organizations are “selling out” the masses of the people, intentionally or un-intentionally. For the sake or promise of crumbs from the master’s table, o…
Post a Comment
Read more 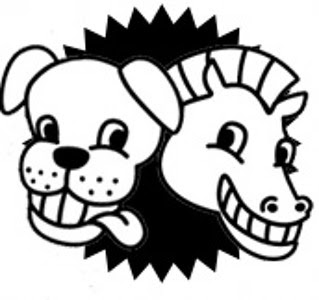 ﻿ Peter King's Dog and Pony Show “You may fool all the people some of the time,  you can even fool some of the people all of the time, but you cannot fool all of the people all the time.” - Abraham Lincoln (1809 - 1865) ﻿     Is that all? Is that it? You've gotta be kidding !!!! In a pathetically transparent demonstration of weak apologia and attempted media spin, the Peter King-Defend-the-NYPD-dog and pony show* came to New York City today.

Importing opportunists and apologists from out of town and out of the country, and backed by one local wanna-be (more on that later), King attempted to justify his roundly criticized and unsucessful 2011 waste of the American taxpayers ,otherwise known as the King Homeland Security Hearings on Homegrown Radicalization, by spouting more of the same rhetoric, distortions and misrepreesentations in a new year. This is to be expected of him . We know him well by now.

As a matter of fact, since the Associated Press in the spirit of the CO…
Post a Comment
Read more
More posts