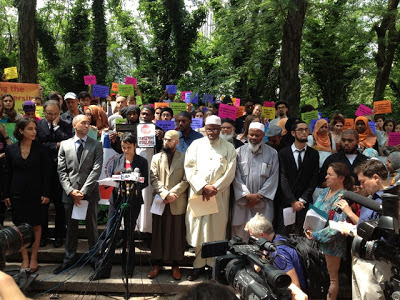 Good morning, peace be unto you all, and As-Salaamu ‘Alaikum. The Majlis Ash-Shura  of Metropolitan NY is a network of some 46 Muslim congregations and organizations representing thousands of Muslim men, women, youth, and children. We are here in representation of  that significant Muslim constituency , to stand with the members of this hard-working legal team. We do so in expression of a common belief of all Muslims in this city and beyond, and people of other faiths as well. We believe that all faith communities, including our own, have a right to exist without stigma, and without having undue suspicion cast upon us, because of our religion.
In the years since 9-11, the NYPD under the command leadership of Police Commissioner Ray Kelly, has covertly altered the status of Muslim houses of worship , from what the Police Department once called “sensitive locations”, to what they now identify as “locations of concern”.
Since that tragic day 12 years ago this coming September, our civil society has wrestled with the task of establishing a balance between public safety on one hand, and on the other, the human right to equal treatment and protection under the law for all people, including Muslims.
Many people in New York City have been misled into thinking that violation of the rights of the minority, are necessary for the safety and security of the majority. It is not. As both citizens and neighbors, we Muslims seek , as the Prophet Jeremiah exhorted, “the safety and security of the city”. This is our concern for  our neighbors, and ourselves.
But when Muslim New Yorkers are led to believe that we cannot trust all  police officers to be loyal to their oath of duty to safeguard all people equally; when we instead witness some officers enforcing a discriminatory policy of surveillance , resulting from suspicion based upon religious affiliation alone, it undermines our ability to partner with law enforcement, and that renders all New Yorkers less safe, not more safe.
50 years ago too many elected and law enforcement officials in our country, believed and maintained that unjust discriminatory policies profiling citizens because of their race or ethnicity, were not unconstitutional. Eventually they were proven wrong. and our country is better because of that.
Today in our city and country, there are those who believe , and after today will continue to maintain, that profiling because of religion, or at least our religion, and it’s resulting suspicion-less surveillance of Muslim men, women, and youth ,where we worship, study in universities, or socialize, is not unconstitutional .
They are unapologetic in their defense of their unjust policies. They might even scour the Muslim community, until they find some unaware soul whom they consider to be “opinion makers”, who will stand with them in defense of discrimination against our community. Allah willing, one day they too will be proven wrong. and the city and the country will benefit.
Discrimination against Muslims is unconstitutional , and we refuse to be scapegoated because of the thoughts or actions of an unbalanced few, who claim the same religion as we do.
We too are unapologetic. But we are unapologetically Muslim, and unapologetically American. As Americans, Muslims are entitled to equal protection under the law, and freedom from discrimination, just as all citizens are regardless of their religion, or lack thereof.
Equal protection and freedom are not just for Christians and Jews, and their places of worship. They are for everyone. It is is not just churches and synagogues, but also mosques and temples that are sacred locations , equally entitled to protocols of respect and regard .
As for ourselves as Muslims, we will continue to pray to the God of Justice. We look forward to our day in court, and on that day, may justice prevail.