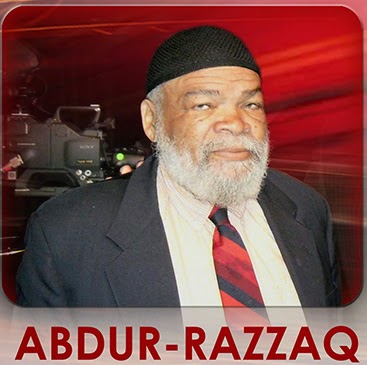 Tonight at approximately 7:45 pm Abdullah Abdur-Razzaq, formerly known as James 67X , passed away in Bellevue Hospital in New York City. He had been hospitalized there for a month before passing quietly and peacefully in his sleep. Brother Abdur-Razzaq had been an aide and confidante to El-Hajj Malik El-Shabazz/Malcolm X, during his days as a minister in the Nation of Islam under Mr. Elijah Muhammad, and after his break with the Nation and founding of both the Muslim Mosque Inc. and the Organization of Afro-American Unity. Over the past several years, Abdur-Razzaq had been an inexhaustible source of information , particularly of the 1950s and 1960, with his archival memory and passionate love for freedom. Historically he can be seen in a rare photo, standing to the immediate left of Dr. Martin Luther King Jr. during his once in a lifetime meeting with El-Hajj Malik/Malcolm X in the Capitol building in Washington, D.C. It was Abdur-Razzaq (then known as James 67X, the secretary of the Muslim Mosque Inc.) who facilitated the meeting when the two giants found themselves in the Capitol Rotunda at the same time, during Civil Rights hearings. Two giant supporters of Shabazz/X have now passed within months of each other. Sulaiman Sealey, former bodyguard for the famed African American leader, passed just a few months ago. Janaaza (traditional Islamic funeral) for  arrangements for Abdullah Abdur-Razzaq have not yet been announced.