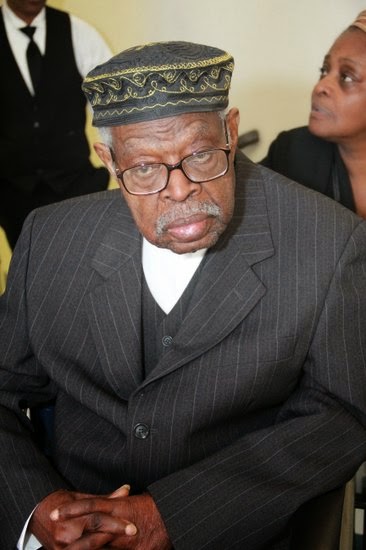 The following is the complete, unchanged text of the original remarks prepared by me for the communal celebration of the life and work of Dr. Ben. There were many speakers (see program) and so by the time I spoke we were asked to keep our comments brief. I did so (five minutes, see here  https://www.youtube.com/watch?v=vch7r9r9g0I ) but decided to publish what I wanted to say but couldn't, as a testimony to our widely beloved elder, an affirmation of his acceptance of Islam, and an address unto those who weren't aware of this (evidently because they really hadn't known what's been going on with him over his last years, beyond reports of his declining health) , but upon receiving the news of Dr. Ben's acceptance of Islam years back (something which I for one stated after his death as a matter of record, nothing more or less) have responded with outright hostility - even going so far as to publicly accuse me of intentionally lying about such a thing (what madness !) .
Both Baba James Small and Dr. Leonard Jeffries, renowned students of Dr. Ben, are witness that I was called upon for inclusion not only in the event, but the intimate meeting with family members which preceded it. I did not call beyond an inquiry as to the family's arrangements. I was called upon to participate as I did by those close to Dr. Ben who knew and understood. I thank them, and Allah knows best and is Witness to all things.

Bismillaahir-Rahmaanir-Rahim. We thank Allah, reflecting upon the life’s work of our elder , Yosef Ben Jochannan, and his invaluable contribution to the healing and empowering of us, of a people in need of  communal and global restoration.  Our elder, along with his friend and colleague professor John Henrick Clarke not only trod the path of those noble ancestors who lived before him -  of  J.A. Rogers, Drusilla Dunjee Houston, John G. Jackson and others - but he labored mightily to bring us all to that path, and to extend it, to stretch it further into the continuum of our people’s struggle for freedom.
There are those, although certainly no one here,  who will not understand the blessed nature of Dr. Ben’s work, or who will underestimate the true scope of it. In his magnum opus entitled Civilization or Barbarism: An Authentic Anthropology, Our master teacher Cheikh Anta Diop, whom our modern day scholar Runoko Rashidi identified as “…regarded by many as a modern Pharoah of African Studies”,  taught us what Cheikh Diop identified as the “components of collective personality”. They were a historical factor, a linguistic factor, and a psychological factor. “The historical factor” he wrote, “…is the cultural element that unifies the disparate elements of a people to make then into a whole, by the particular slant of the feeling of historical continuity lived by the totality of the collective.”
When one wants to ascertain the state of one’s health, the first thing one does is look at history.  When we walk into a doctor’s office the forms enrolling or registering us for treatment , first question us as to our identity (What is your name? Where are you from?  i.e. what is your address?) We are then questioned as to our history, even before the examination begins, and if needed, treatment commences.
Dr. Yosef Ben-Jochannan was a physician who took on the African people of the global diaspora as his patients. Blazing a path for us, a people in quest of a healthy collective personality, seeking psycho-spiritual regeneration, Dr. Ben understood the importance  again, of what Cheikh Diop identified as “ historical conscience”. That conscience is essential to the process of Africans distinguishing ourselves as a people, from an amorphus black population.
As our teaching physician, Dr. Ben asked us “how will you know who you are if you don’t know who you were?” “How will you know the full extent of your current health  if you don’t know  your previous state or condition?” he queried.  So as a people in treatment we thank  the Creator for him. We thank Allah for our doctors who seek to heal us.
It amazes me to witness in the Village, those who would lay claim to Dr. Ben. One side of the room says “ He was ours and therefore we claim him in exclusion of others”, and the other side of the room declares “ No, he was ours and we claim him in exclusion of others”. Foolish people, do you not understand that no one has more of a claim on any of us than the Creator of the heavens and the earth, and all things in between?  We come from Him, we belong to Him, and unto Him will we return - all of us, living our life in between our first breath given by Him, and the last one granted by Him.
This marvelous historian, physician of African people, scholar-warrior wielding historical continuity and consciousness as a cultural weapon, practiced what he preached. he preached, “Physician heal thyself”, and never stopped practicing that as long as he lived.
When one looks at Dr. Ben religiously and spiritually, it is clear that he had a life-long commitment to worship of The Creator, our Creator. and when I say “our Creator” I mean The One described in the ancient sacred writings, the Metu Neter, as  “…incapable of being imagined by man, even as the hand of man was incapable of making a figure that could be considered to be an image or likeness of  Him; The One Who could not be sculptured or seen, nor contained in a habitation… the Great Unseen, Unknown and Incomprehensible Creative Power, which had existed forever and was the source of all created things” ( Tutankhamen, Amenism, Atenism, and Egyptian Monotheism, E.A. Wallis Budge)

It was the Almighty Who was worshipped by our highest-consciousness ancestors, and He is The One Whom Dr. Ben worshipped.  When we look at his personal life we see that Dr. Ben worshipped as a younger man according to the traditions of Beta Israel , as did others in the territory of Ethiopia where he was born.
I admit openly that no one was more surprised than me, when several years ago I finished leading prayers and delivering a sermon during an Eidul-Adha (feast of the Abrahamic sacrifice) Muslim high-holy day worship service, and I was informed that Dr. Ben was there , and had been present for the entire service,  and worshipped according to Islamic tradition as one of us.
I spoke to him and he affirmed his faith and what I would call his expanded or evolved identity to me, personally.  Or another time when he came to the Mosque of Islamic Brotherhood for Friday prayers , and prayed in the ranks behind me.
Or his frequent attendance at Friday prayers at Harlem Hospital when his health still allowed it and before he was moved to the Bronx nursing home. This is the truth and many are witness to this in the Muslim community within the Village, although there are others in the Village who bite off the tips of their fingers in rage and call me a liar for relating what I have just said to you , because they  can’t comprehend as a student what their teacher did.
However regardless of  the outer form of his worship, the object of Dr. Ben’s adoration was always the same; the One Creator of all. And as a self-determined free African human being, he exercised his right to worship as he pleased, and let none of us be so narrow-minded or arrogant as to deny him his choices as he walked on the path of submission to The One who was, is, and shall ever be.  Dr. Ben has now moved unto what my own late teacher, Ash-Shaykhul-‘Allama Al-Hajj K. Ahmad Tawfiq called “the evolutionary path of our ancestors”.
He said to those of us who were his students, “ No teacher can lead a student all of the way to enlightenment. He or she guides him or her to the Path, walks with them a little way upon it, and then says, ‘That which you seek is that way. Pursue it. I must leave you now as I have others to attend to'..”  We thank Allah for our visionary leaders and teachers, those who have left, and those who are still present, and we pray that we will continue to walk the Evolutionary Path, to Glory.
And now I conclude with a traditional Islamic prayer:
Allaahum-maghfir lihayyinaa, wa mayyitinaa, wa shaahidinaa, wa ghaa'ibinaa, wa sagheerinaa wa kabeerinaa, wa thakarinaa wa 'unthaanaa. Allaahumma man 'ahyaytahu minnaa fa'ahyihi 'alal-'Islaami, wa man tawaffaytahu minnaa fatawaffahu 'alal-'eemaani, Allaahumma laa tahrimnaa 'ajrahu wa laa tudhillanaa ba'dahu.
Translation


“O Allah forgive our living and our dead, those who are with us and those who are absent, our young and our old, our menfolk and our womenfolk. O Allah, whomever you give life from among us give him life in Islam, and whomever you take way from us take him away in Faith. O Allah, do not forbid us their reward and do not send us astray after them, Aameen”.
DR BEN DR. BEN A MUSLIM YOSEF BEN-JOCHANNAN