A DAY OF ACTION FOR IMAM JAMIL EL-AMIN

The following statement was written by me in my capacity as the Deputy Amir of The Muslim Alliance in Nortrh America (MANA) and the Amir (President) of the Majlis Ash-Shura of Metropolitan NY .It was written for an event that was held yesterday in Atlanta, organized by supporters of Imam Jamil, including the indefatigable Hajj Mauri Saalakhan:


"A Day Of Action” for Imam Jamil Abdullah Al-Amin
Monday, March 19, 2012, at the Georgia State Capitol
Statement by Imam Al-Hajj Talib 'Abdur-Rashid
As-Salaamu 'Alaikum wa Rahmatullah, dear Brothers and Sisters in attendance at today's important event. Although I am not able to be with you today, I wish to add a voice of support on behalf of both The Muslim Alliance in North America, and the Majlis Ash-Shura (Islamic Leadership Council) of Metropolitan New York, for our beloved and respected brother in Al-Islam, Imam Jamil Abdullah Al-Amin.

Over the past decade as America has become absorbed in the dynamics of living in a post- 9-11 world, much attention has been diverted away from the plight of the Imam and others in his situation in the domestic prisons of America. Although the U.S. has an official position that "There are no political prisoners in America, there are only people who commit crimes ", those of you present today at this gathering know better. Imam Jamil remains a leader of seminal importance in our country , although many would rather forget or obscure his significance. It is of importance that books that authentically and comprehensively chronicle the civil and human rights struggles of the downtrodden people of this land do not fail to mention the Imam's courageous work as a young man in the South, during a time when to take up such work was to risk death.

Although after he became a national Muslim leader Imam Jamil chose to "walk softly and carry a big stick", his impact, stature and the significance of his message and mission was not diminished. On the contrary, it grew. Those of us who attended the Imam's trial over a decade ago remember that the trial judge skillfully manipulated the proceedings so as to obscure the political significance of who the Imam was and is, as if that had no significant bearing on how he came to be in that court. This deliberate omission and the implication of government agencies maintaining an open file of over 44,000 documents on the Imam, with no discovery of evidence of wrongdoing , was in and of itself a miscarriage of justice.

We also remember that during the sentence phase of the Imam's trial that his neighbors - simple, honest, working and lower economic class Christian folk, defiantly defended his character and asserted his innocence. Those of us who are Muslims know that the Prophet Muhammad (peace be upon him) said that "A man's neighbors knows him best", and what Imam Jamil's neighbors knew of him was consistent with what we know. However all of that notwithstanding, the contradictions of the Imam's current state of incarceration must be continually exposed, and we of MANA and the Majlis Ash-Shura of NY salute you for not allowing that process to die !

If Imam Jamil is not a political prisoner as the government asserts, then why is he in a prison with others convicted of crimes of a political nature? Following a trial best described by our brother Mauri Saalakhan as "deeply flawed" , Imam Jamil was found guilty of a felony violating local statutes, so why is he in a federal prison? How is justice served by burying him alive in a "domestic Guantanamo", in another part of the country, rather than serving his time where the alleged crime took place? And if Imam Jamil's religion and politics have not been taken into account in determining his punishment , then why is he being subjected to justice meted out according to a double standard? How many other citizens of Georgia convicted as he was , are in a federal prison in another part of the country although they were not found guilty of any federal crimes? Why is the Imam being treated differently?

We must not rest until the judicial system addresses these matters in a just and impartial way. May Almighty God bless this effort and all ones like it, and those of you who have helped to make this day a reality ! 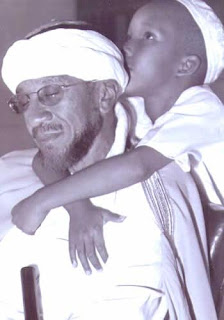